Toronto is often referred as the most diverse city in the world, and it is not surprising as more than half of its population were born outside the country. With this comes numerous innovative schemes including a 5-hectare Quayside Project1, which an urban innovations company, Sidewalk Labs lead in a partnership with the Canadian government. This project started in 2017 by the eastern waterfront to create a wholesome live-work neighbourhood. This would theoretically create new economic opportunity for many people, thereby increasing the quality of life. Specifically, the plan is to generate $14.2 billion annual income and 44,000 direct jobs by 2040. The Quayside plans revolve around multi-level innovations including mobility, public domain, personal and social infrastructure, sustainability, and digital advancement.

The mobility sector focuses on a transportation system that reduces the need to own a car by providing safe, efficient, connected, and affordable options. For instance, light rail extension would connect citizens to workplaces while attracting the general population to the waterfront. Heated, wide road would be used to get rid of snow in the cold winter and to encourage people to walk or cycle. Other services include mobile applications that allow users to share bikes or cars, mobility subscription that introduces a single payment system for all their trip choices (whether it is a car pool or e-scooter), an underground package delivery system, and adaptive traffic lights. To create a smart transportation system, Sidewalk Labs exploited a model called the Greater Toronto Area, which is a simulation of travel behaviour of people in the region. In regard to the adaptive traffic lights, they make live-time decisions to achieve optimal efficiency by aiding a slower pedestrian to cross the road or letting a streetcar that is late to travel first. One of the most anticipated experiences that this project would entail is a self-driving vehicle. The vehicle could be called via digital interaction by using a voice assistant or found by following a visual line on the ground that is a part of the smart infrastructure. This would provide solid independence while also the feeling of being home to everyone. Figure 1 shows an example case of this smart vehicle.

The public domain sector focuses on the encouragement of social activities in open space. There was a survey that was made to find out the needs for an open space and some of the shared answers were convenience, tranquillity, and spectacle. The 3 public domains planned are Parliament Plaza, Silo Park, and Parliament Cove and Slip. Parliament Plaza is a big open space for markets, art exhibition, and other events, and it is very close to Parliament Street, which is packed with residents and shops. The emphasis of culture would attract various kinds of people, spreading diversity even more. Silo Park is an idealized playground for all ages. It would consist of 4 different parts: play-scape area, multi-sport area, tree layers, and experimental zone. The play-scape area would have a conventional children’s playground as well as a skatepark and exercise equipment for all ages. The inclusive design of this area would give off a comfortable atmosphere. The multi-sport area is going to be futuristic as the lines on the ground will be light-based and modify themselves depending on the sport being played e.g. basketball court, soccer field, etc. The park will be filled with more than 400 trees to make a mini forest. This environment will make it fruitful for different plant and insect species to coexist. These trees would be checked by a real-time digital maintenance system and be reported to the officials when there needs to be a change. Lastly, experimental zone is going to contain varying activities related to environmental and cultural history, tradition, and respect for nature. Parliament Cove and Slip are designed as a picnic place. It connects the water to a hang-out area, gathering people to go on the boat or even rest at a fire pit. Unique traits of this domain would be floating spaces and walkway. They provide access to a floating stage for a musical event and space for workshops, sunbathe, or just linger on the water. 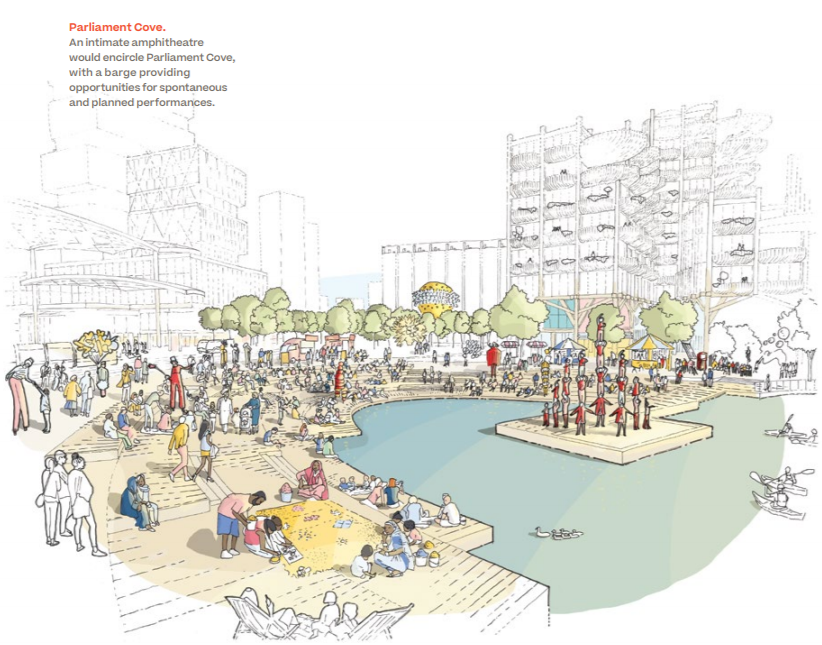 The infrastructure sector aims to construct a more affordable and welcoming community. Factory-produced mass timber is a part of this plan and while the word ‘factory’ sounds counter-intuitive to “welcoming”, there is more to it than how it seems. A relatively new material as known as mass timber is in fact more sustainable (isolates CO2 emission) than standard building materials such as steel and is just as fire-proof and resilient. It is also easier to manufacture, reducing the overall construction duration and cost. The manufacturing process would take place off-site (Ontario-based) with the building components pre-evaluated by the city, which would decrease any uncertainty in the construction process, waste, regional disruption, and increase site safety. The two kinds of mass timber that will be produced are cross-laminated timber structural panels (CLT) and glulam beams, each combined by 3—7 layers of wood. CLT consists of lamellas of glued wood, where every other wood is glued perpendicularly to the previous one. This gains the rigidity in both directions, like plywood but thicker. This also increases tensile and compressive strength. CLT is usually obtained from a renewable source e.g. reforestation and does not require fossil fuels for its production. It contains multi-functional traits that can be used in various ways such as for walls, floors, furniture, ceilings, and even roofs. There are even skyscrapers being built with CLT materials. Figure 3 shows an overview for CLT production. Housing price will also be more affordable by setting aside 40% of housing stock to below market units. Toronto has been facing challenges with rising construction costs that divided the city into three parts of the rich, the poor, and the middleclass, which the last one has been shrinking. This programme aims to integrate all classes. The design of these houses will be more efficient; 7% smaller than traditional apartments, increasing the number of units and revenue potential, thereby increasing affordable housing commitments. This also promotes innovative furniture like convertible desks and multiutility bed that turns into shelves and sofa. The warm interior with exposed wood would induce biophilic effects such as reduced stress and calmness.

The digital sector strives for flexible and affordable digital infrastructure. With public ubiquitous Wi-Fi, the internet speed will be revolutionised by incorporating passive optical network (PON). PON is point-to-multipoint optical network with no active elements in the signals’ path from source to destination3. Essentially, PON has longer service path, higher bandwidth, allows downstream video broadcasting, eliminates electronic devices in the middle of the network, and allows easy upgrades to higher bit rates or additional wavelengths. Figure 4 shows the PON topologies. 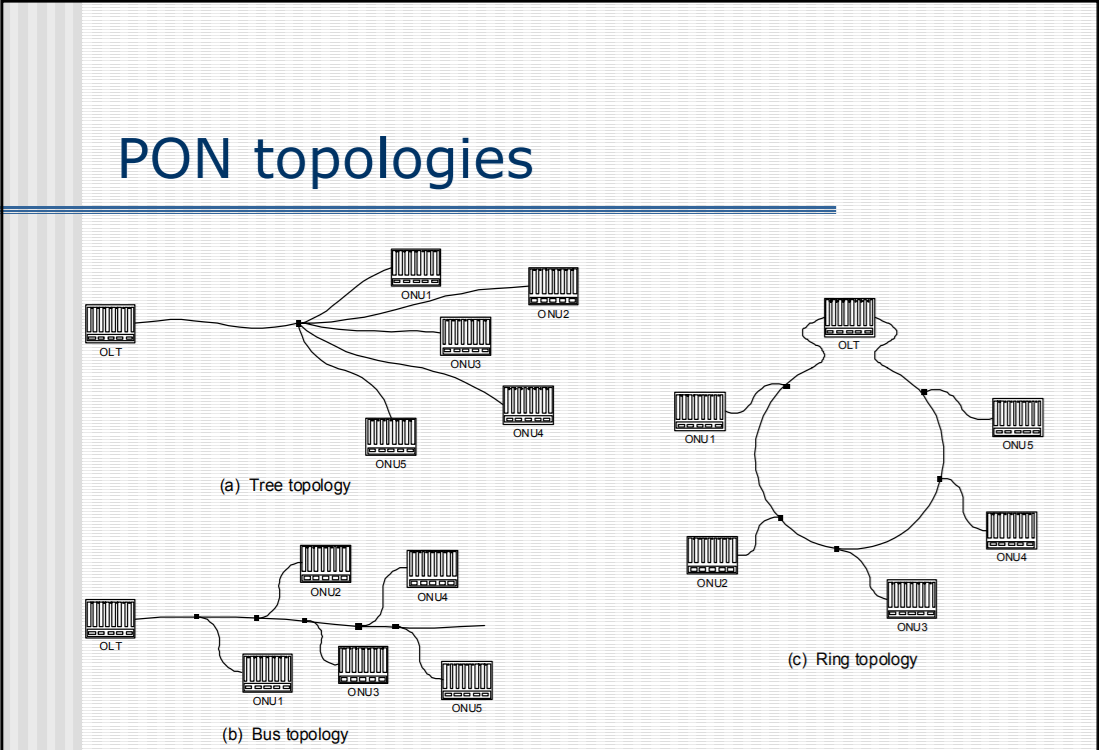 Moreover, installation and maintenance costs will be reduced with an urban USB port. When cities integrate devices for collecting data, the integration process often induces disruption and high capital usage to street life. For example, traditionally, adding one car-counting sensor to an intersection requires shutting down a lane indefinitely, a truck with staff members, mounting solutions, and shutting down supply towards poles. To reduce these steps, Sidewalk Labs introduced a standardised mount called Koala that would make this process cheaper, faster, and safer. The company predicts that the installation process would be reduced by 92%. Koala would provide open infrastructure, capable of working with any device that meets its published standards – USB port. Figure 5 shows an installation process of Koala. 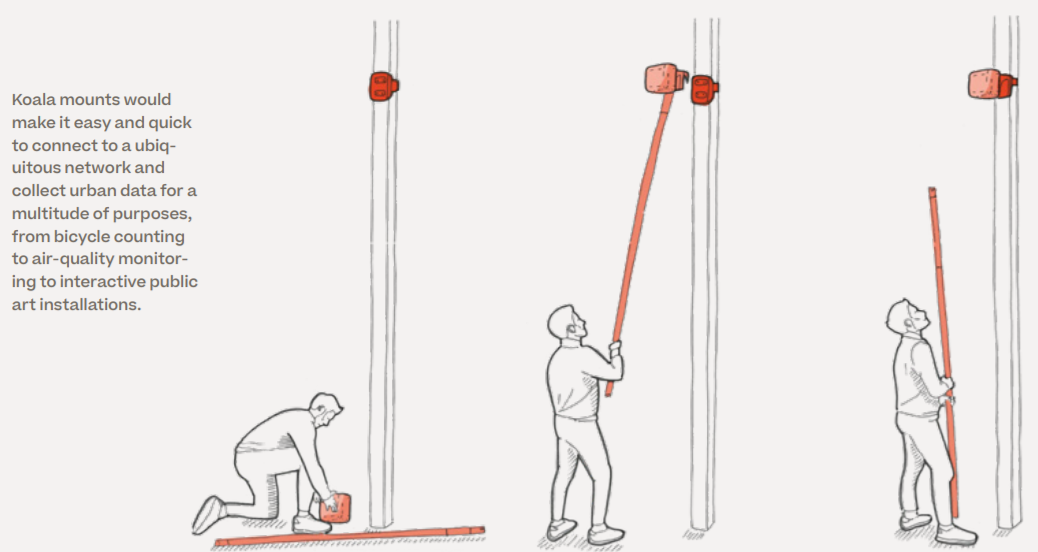 There is more information regarding the Quayside project in Reference 1. Readers who wish to find more about it should check it out. Also, Sidewalk Labs goes into detail about their plans in the Riverside District and economic development in the same link. The information can be found in the attached file on the bottom of the page.